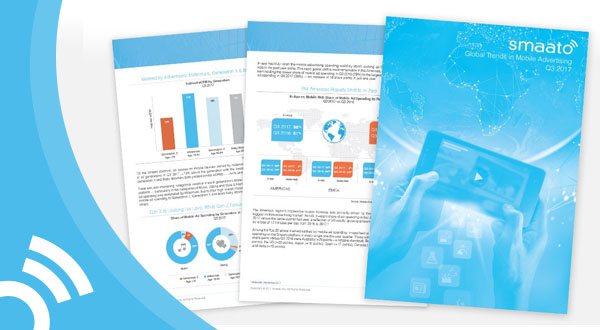 By analyzing the more than 1.5 trillion mobile ad impressions served on the Smaato platform this past quarter, we uncovered the key trends that are shaping today’s mobile programmatic landscape in our Q3 2017 Global Trends in Mobile Advertising Report. As consumers and advertisers continue to shift their time and budgets to mobile, these insights provide industry stakeholders with relevant information for addressing the mobile advertising market as it grows and evolves.

Download the report now to learn more about the key mobile advertising trends observed on the Smaato platform in Q3 2017, which include:

From 2016 to 2017, mobile ad spending increased +34% worldwide, while ad spending for TV and desktop remained stagnant. Advertisers’ rising investment in mobile is fueled by the increased amount of time that consumers are spending on their mobile devices — and specifically in-app.

The Smaato platform received more ad requests than ever before in Q3 2017, with +136% global growth since the same quarter last year. Even mature mobile advertising markets, such as the US (+345%), Japan (+180%) and the UK (+174%) saw huge ad request gains. Mobile eCPMs also hit a record high this quarter, with EMEA showing the strongest growth of all regions.

In-app advertising continued to be the main growth engine of worldwide mobile ad spending. In-app set a new ad spending share record yet again in Q3 2017 on the Smaato platform, accounting for 96% of global ad spending. 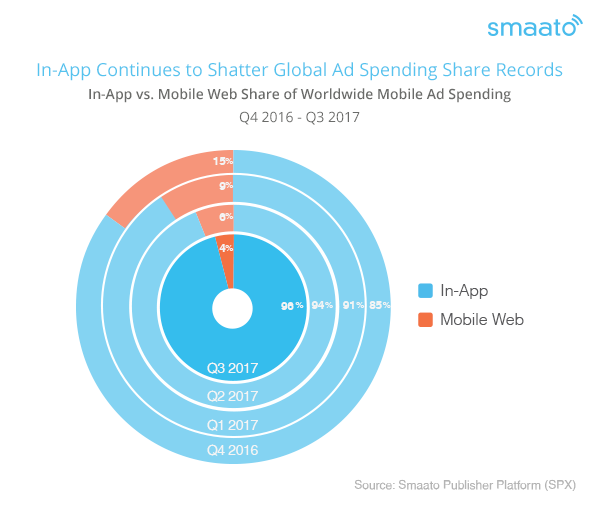 Mobile video growth continued to outpace all other mobile ad formats, with ad spending for this highly-engaging format increasing +90% since last quarter. Mobile video also garnered the most valuable ad spaces of any ad format on the Smaato platform, generating eCPMs that were on average 4.1X higher than those of non-video ad formats. 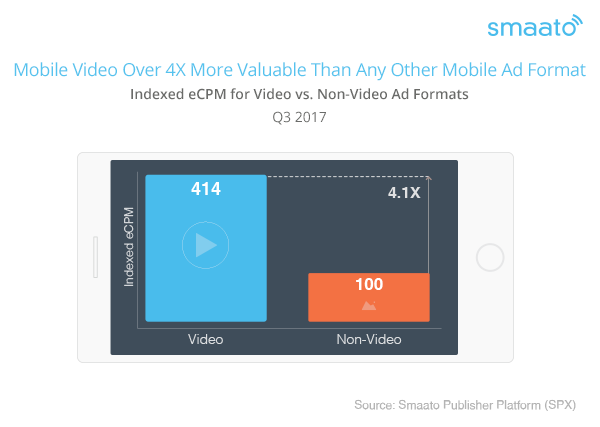 By passing ad requests with data, app developers and mobile publishers earn significantly higher revenue for each ad space, while advertisers are able to better target their ads only to those mobile users most likely to be interested in the particular advertiser’s products or services. Publishers who passed age data saw 2X higher eCPMs than those who did not — proof that age really does matter. 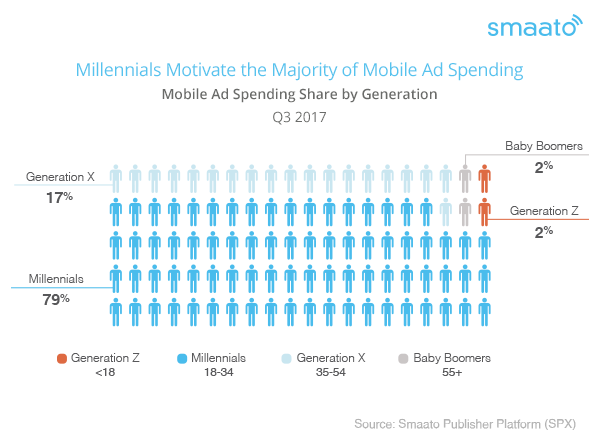 Advertisers paid the highest global eCPMs for the Millennial age group — a mobile-first generation that drove the overwhelming majority of ad spending on the Smaato platform, capturing a 79% share. Besides being the most active mobile users, Millennials are also the most adept and engaged app users of any current generation — and what makes this generation particularly interesting to certain advertisers is their willingness to shell out cash on their mobile device, particularly for apps and in-app purchases.

5. Android Dominated Globally, But iOS Was the Apple of Advertisers’ Eyes

Android picked up major ad spending share points over the past year to reach an all-time high this quarter at 68%. Android’s share of mobile ad spending is especially high in the emerging mobile markets of Latin America and APAC, exceeding 90% in regions such as India, Indonesia, Peru and Argentina. 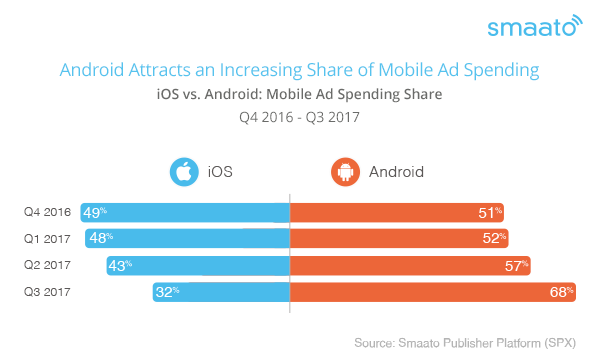 Despite Android’s hold over two-thirds of the mobile advertising market, iOS is widening the eCPM gap between these two mobile operating systems. In Q3 2017, eCPMs on iOS devices were an impressive +30% higher than Android eCPMs.

Home to more than 724 million smartphone users (or 28% of all smartphone users worldwide), China is the mobile advertising industry’s most important growth engine. In the past year alone, mobile ad requests from China increased +64% and eCPMs on devices within the country increased +74%. For advertisers looking to target these mobile-first consumers, keep in mind that the majority are male (85% of mobile ad requests come from men’s devices) and young (50% of ad requests come from users aged 13-24).

For more insights into the growth and evolution of the mobile programmatic advertising landscape, download the Q3 2017 Global Trends in Mobile Advertising report.