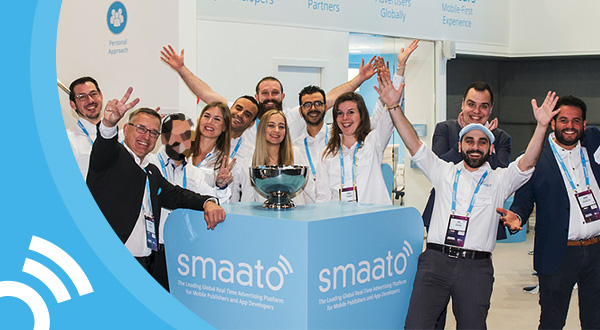 MWC 2019 in Barcelona is at an end, but the hottest topics from the show will be talked about for a long time to come. Our team was on the ground in Barcelona to meet with partners, as well as discuss the future of mobile advertising with visitors to our booth. The conversations we had varied, but there were a few common topics that we heard repeated throughout the four-day event. Here’s what some of our team members had to say:

“There were lots of cool phones and smart watches revealed at MWC, but the foldable phones got the most attention. I didn’t have the chance to try out the foldable phones from Huawei and Samsung, but I’m looking forward to seeing if they will catch on. These foldable phones are definitely expensive at the moment, but they have the potential to change up the industry. Time will tell if they’re just a gimmick or not.”

“5G was one of the big themes in Barcelona and it’s something that both we and our partners are very excited about. Video has been growing dramatically on the Smaato platform, and having faster mobile Internet speeds means that video can grow even quicker. All the big US carriers released their plans to roll out 5G, so it looks like quite a few markets will have the technology by this summer.”

“Judging by what we saw at MWC, it looks like augmented reality is going to be taken seriously from now on. Remember the enormous hype from Google Glass earlier this decade? That hype might finally be realized thanks to Microsoft. While there have been fun applications of AR in the past, like Snapchat filters and Pokemon Go, most people didn’t see how AR could be used practically. Microsoft’s new HoloLens 2 is getting rave reviews and looks like it can really push AR further. The AR market is growing fast and Smaato sees the potiential of monetizing AR apps of all different types.”

In-App Advertising and Children: A Webinar on Privacy and Compliance

14 Things You Didn’t Know About Smaato

In-App Advertising in 2019: Conversations With Smaato’s Founders and Leaders