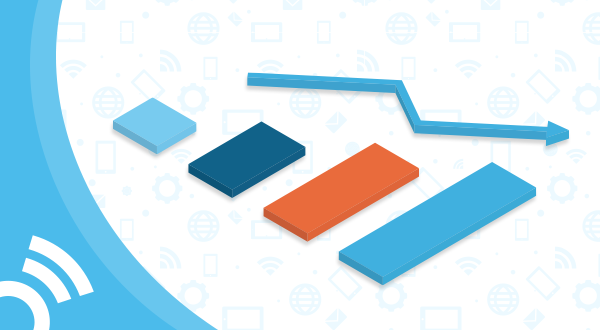 Since Mary Meeker released the 2018 Internet Trends Report last week, the digital realm has been abuzz with what these 294 slides have to say about the future of our online world — including us here at Smaato.

Meeker is a renowned venture capitalist, and her annual Internet Trends Report is eagerly awaited each year across many digital industries. To break this data-packed presentation down for those specifically in the mobile advertising industry, we have identified the most relevant data points for mobile publishers and advertisers, and we will look at what these trends mean for the mobile advertising industry as a whole.

Internet Penetration Nears Saturation, but Mobile Has Room to Grow

Meeker kicks off this year’s report by analyzing the growth of internet devices and users. Smartphone unit shipment growth was stagnant in 2017, and the number of internet users and usage also saw lower growth than in previous years. This stagnancy is to be expected, however, considering that the market has already hit 50% internet user penetration.

When it comes to the consumer devices used to access the internet, some are faring better than others. Mobile is thriving in today’s always-on world, as proven by these handheld devices’ remarkable growth figures in the report. In the past year alone, US consumer time spent on mobile grew by +6% — meanwhile, desktop/laptop saw dwindling usage.1

Competition is alive and well among all device manufacturers in the mobile industry, and this competition is driving innovation as well as driving down prices. Despite the iPhone X making headlines last year for being Apple’s most expensive smartphone to date, the average selling price for new smartphone shipments is approximately $100 less than it was ten years ago.2

Mobile video is also a hot topic in Meeker’s report, which highlights that mobile video usages are set to surpass 30 minutes per day globally in 2018.3 Perhaps a key factor in this growth is the global expansion of WiFi networks, which has seen an exponential growth trend over the past few years that is vital for the download and usage of many apps in countries without reliable mobile data coverage.

The report also points out that many mobile services rely on personalization that is driven by the collection and analysis of user data. This leads to a privacy paradox in which the creation of high-quality, low-cost services requires user data — however, regulators also must protect this data against any “improper” use. In the presentation at the 2018 Code Conference, Meeker explained that “while it’s crucial to manage for unintended consequences, it is also irresponsible to stop innovation and progress.”

The report highlights that mobile is the only media format in which there is a significant gap between consumer usage and advertiser spending. Meeker calculates this discrepancy for the US, identifying a $7 billion opportunity for advertisers to get noticed on mobile. 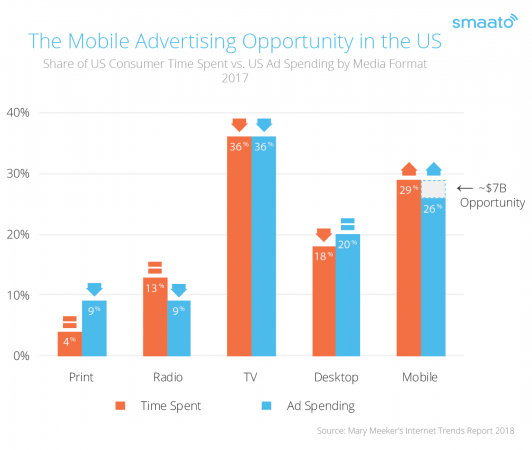 In light of recent brand safety and data privacy scandals, however, accountability concerns from both users and advertisers is rising. Meeker says that consumers have a “love-hate relationship with data,” as data can be an important driver of consumer satisfaction and the majority of consumers are willing to share their data for clear personal benefit — however, the industry is currently trending towards more data privacy regulations, such as the GDPR, and making consumer privacy tools more accessible.

While China is known to be a unique market when it comes to all things online and mobile, they are seeing similar growth patterns regarding internet users and usage as the rest of the world. While the number of internet users has remained largely the same over the past years, mobile data usage is rising rapidly in China, with +162% growth in 2017.4

A closer analysis of how mobile time is spent in China reveals that video is quickly becoming consumers’ entertainment category of choice. Video’s share of mobile time in China increased from 13% in 2016 to 22% in 2017, driven by short-form videos less than five minutes long. Meanwhile, social networking is losing its majority power — while social previously accounted for a whopping 60% of mobile time in China, its share decreased to just 47% in 2017.5

It should come as no surprise that China continues to lead the rest of the world in mobile payment adoption, with over 500 million active mobile payment users in 2017.6 The reach of mobile payments is expanding as they are also becoming easier to complete in other countries around the world.

Meeker concluded her debut presentation of the report at the 2018 Code Conference with some advice for those of us in the tech industry, saying: