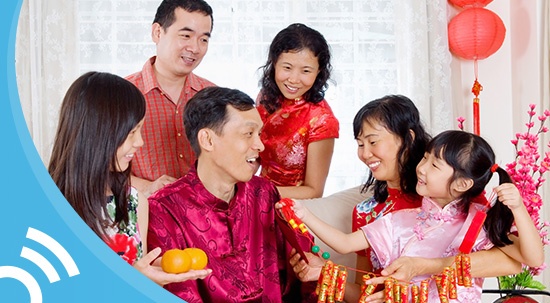 Each year, Lunar New Year brings good fortune to advertisers with a spike in mobile usage as friends and family send messages, watch videos, play mobile games and exchange virtual red envelopes. This holiday season also brings about the world’s largest migration of people, as millions traverse the globe to spend time with their family and friends.

Savvy advertisers worldwide can utilize the advanced tracking capabilities of the in-app environment to target these mobile users during this high-spend season — because no matter where APAC consumers may spend the holidays, they are sure to always have their smartphone by their side.

Lunar New Year is celebrated throughout many APAC markets, including China, South Korea, Indonesia, Vietnam and the Philippines. The most-exchanged gifts during this holiday are red envelopes — a monetary gift that is packaged inside a red envelope and given as a blessing or symbol of good luck.

In 2014, the red envelope was digitized by WeChat, and the sending of virtual red envelopes via mobile devices has been growing in popularity ever since. This is especially true in the world’s most app-centric mobile market, China — where consumers spend 99% of their smartphone time in-app.1 Over the 2017 Lunar New Year, Chinese mobile users sent up to 760,000 red envelopes per second.2

Lunar New Year is a social holiday, and for those that cannot physically spend time with their closest friends and family during this celebratory period, sending virtual red envelopes or communicating through social apps is the next best thing. During the 2017 Lunar New Year, the leading in-app activity among mobile users in China was social. Other popular app activities included video, news, photography, shopping, music and gaming3 — all of which are ideal for brands and performance marketers to get noticed via engaging and targeted in-app ads.

As a result of users’ increased mobile app usage, Lunar New Year brought much prosperity to the mobile advertising markets of celebrating APAC countries. On the Smaato platform, countries that celebrated Lunar New Year saw impressive increases in daily ad requests during the 2017 holiday period versus the average January day. Markets with the most uplift included China (+35%), Vietnam (+32%), Taiwan (+16%), Singapore (+14%) and the Philippines (+9%). 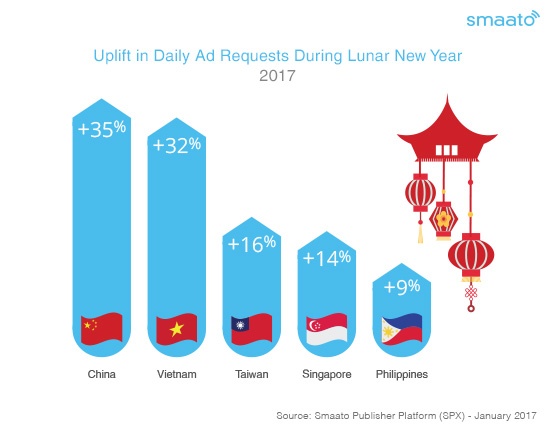 Lunar New Year is also the world’s biggest holiday for travel as many head to their hometowns for family reunions and celebrations. Workers in China have seven days off over Lunar New Year, one of two annual “golden weeks.” As a result, nearly three billion trips were made within China alone during the 2017 Lunar New Year celebrations.4

However, people aren’t just going home for the holidays this year — an increasing amount are vacationing abroad. Over six million Chinese traveled abroad over the 2017 Lunar New Year to popular destinations such Thailand, Japan, the US, Singapore and Australia. China’s international holiday travelers are also quite young — over one third are between the ages of 25 and 34.5

In order to advertise to these determined Lunar New Year travelers, advertisers need a similar determination in their marketing plans. But what’s the best way to approach this?

As the Year of the Rooster draws to a close, the best way to reach the millions of Lunar New Year travelers is to advertise via their most trusted travel companion — the smartphone. Here are some helpful tips for advertisers to consider when planning an in-app advertising campaign:

During last year’s Lunar New Year period, 32% of online purchases were made via mobile — however, 64% of consumers browsed retailers’ websites on both mobile and desktop before making a purchase.6 Advertisers can therefore drive conversions and increase users’ lifetime value by creating a cross-device Lunar New Year campaign that utilizes in-app retargeting.

For advertisers to maximize the effectiveness and cost-efficiency of their Lunar New Year in-app campaigns, they should consider focusing on mobile video advertising. This top ad format is proven to increase brand awareness, reach more targeted audiences and increase brand favorability.7

The cookie-based world of desktop, laptop and mobile web is losing its ability to effectively reach and track users — especially in light of the recent arrival of iOS 11, in which all Safari iOS third-party cookies are rendered obsolete. However, the in-app environment offers the most accurate targeting solutions for advertisers to reach their ideal audiences as they travel to visit family this Lunar New Year. Using sophisticated device tracking, in-app advertising enables advertisers to accurately reach their ideal audiences as they move around the digital and physical world.

As the calendar turns to the Year of the Dog, the amount of time and money that APAC consumers spend in-app surges. By taking advantage of this annual trend with a targeted in-app advertising campaign, Lunar New Year is sure to bring good fortune (and conversions) to advertisers worldwide. 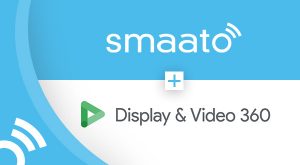