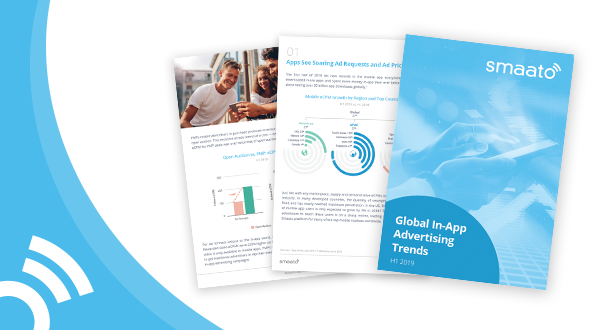 During the first half of 2019, mobile users downloaded more apps than ever, with Q2 2019 alone seeing over 30 billion app downloads globally.1 Consequently, such dynamics resulted in a growth in both ad requests and ad prices on the Smaato platform.

Ad Requests and Ad Prices On the Rise

Advertisers are racing to reach users in competitive mobile markets, leading to soaring prices. A significant difference is notable between saturated markets, such as Canada, where eCPMs grew only 4%, and emerging markets, using the example of India, where eCPMs doubled in the first half of the year.

The more remarkable difference is reflected in ad requests. Developing markets still have high smartphone adoption and app download rates, causing ad requests to soar. In India, the number of smartphone users is expected to rise by more than 13% in 2019, while mobile ad requests tripled from H1 2018 to H1 2019. Several other countries saw a similar increase. Peru is expecting the total number of smartphone users to increase by nearly 50% in 2019 compared to the previous year, and Egypt ranked second on Google Play charts for year-over-year growth in market share.2

Advertising in a trustworthy and protected environment, with access to a premium inventory, is progressively becoming common practice for brands. This caused a stream of budgets flowing into invitation-only private marketplaces (PMPs), with in-app ad spending via PMPs rising 250% from H1 2018 to H1 2019. A growing interest in PMPs does not come as a surprise, as eMarketer predicts that digital display ad spending via PMPs in the US will overtake that of open auctions in 2020.3 Through PMPs, advertisers can easily access the inventory that is not available via open auctions, causing the average eCPM for PMP deals to be more than twice that of open auctions in H1 2019. However, the majority of programmatic transactions are still conducted via open auctions on our platform.

It’s All About Data

By advertising in mobile apps, advertisers get access to targeting possibilities not available with other channels. Publishers and app developers that can collect user data greatly profit when including this data in the ad request — and the more data contained in a single ad request, the more the advertiser will pay for the impression. For instance, the eCPM of an ad impression including the device ID and GPS location was 138% higher than one without any additional data in H1 2019 on the Smaato platform.

The following infographic covers some of the biggest stories in our H1 2019 Global In-App Advertising Trends report. To get the full story, including the latest overview of top trending ad formats — native, video, and banners — along with the spotlight on APAC, download the report.