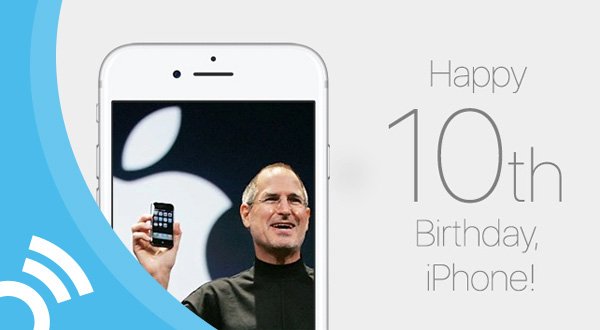 Appy Birthday: What a Difference a Decade Makes

When Apple released the first iPhone ten years ago today, a revolution was born that would change our lives and create multiple billion-dollar industries. To commemorate the 10th anniversary of this monumental mobile moment, we are taking a look at how much the iPhone has changed our lives, impacted advertising and defined a new generation.

It’s not that the iPhone was the first mobile phone nor even the first smartphone. The invention of the Smartphone dates back to the 1970s, and in the later part of the 1990s, many mobile phone users began carrying PDAs (personal digital assistants) that ran on various systems such as Blackberry OS and Palm OS. Nonetheless, everything changed when Steve Jobs pulled the iPhone out of his pocket in early 2007.

There’s an App for That!

Designed for a better user experience, the iPhone quickly changed how we used and why we carried a mobile device. Yes, the iPhone was a mobile phone, but more importantly, it became imperative in our daily lives. It put the internet in everyone’s pocket and then, after Apple launched the App Store in 2008, it made apps an integral part of everything we do.

Ten years later, 85% of the world’s photos are taken with a smartphone, according to Infotrends, and selfies are part of our daily vernacular. With apps like Tinder, smartphones changed the way we meet people. They have become our portable mall, personal shopping device and even our wallet.

Today, consumers spend over 2 hours per day on their smartphone and 89% of their smartphone time in-app, according to eMarketer. As noted in our Q1 2017 Global Trends in Mobile Advertising report, in-app held a 91% share of total mobile ad spending worldwide versus mobile web in Q1 2017 on the Smaato platform. This app addiction is not specific to a particular OS either — in-app is a mobile-wide phenomenon.

In the decade since the launch of the iPhone, the creation and rapid adoption of apps ultimately led to in-app advertising’s current domination of the mobile advertising world. Apps allow for much more reliable and durable user targeting and tracking across devices, allowing in-app advertising to bring unique opportunities and capabilities for app developers and advertisers alike.

We are currently seeing in-app video advertising skyrocket on the Smaato platform. As users are more engaged with this ad format, advertisers are able to effectively communicate their messaging and app developers are able to improve their monetization. Advertisers and particularly mobile gaming apps are realizing very strong results with rewarded video. Native mobile advertising also continues to present huge opportunities for advertisers and app developers alike. We have officially reached the ‘app age’, and today, our love affair with the device that fueled it all celebrates its 10-year anniversary. We’ve come a very long way in ten years. Here’s to the innovation and opportunity mobile will bring over the next ten years.