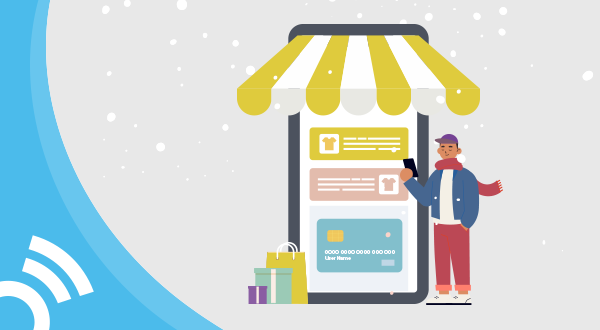 The most festive time of the year is fast approaching and consumers are getting ready to increase their spending significantly as they search for the perfect gifts. 2018 was the biggest holiday season for e-commerce, with more than $970 billion in recorded retail sales in the US alone.1 For 2019, eMarketer projects that US retail sales will reach $1 trillion for the first time in history. 2

While the numbers for in-app spending continue to soar, mobile is increasingly the place to be for both publishers and advertisers throughout the holiday season. Consumers are continuing to spend more time in-app, and we can expect to see numbers for m-commerce that are higher than ever this year.

In this blog post, we will look at holiday data from 2017 and 2018 on the Smaato platform, analyze how Black Friday has been adopted around the world, and take a look at the industry trends for the upcoming holiday season.

Traditionally, the Thanksgiving weekend has marked the beginning of the holiday season for shoppers in the US. Thanksgiving is always celebrated on the fourth Thursday in November, with many people taking a long weekend as a result of the public holiday. The following day is known as Black Friday, and has been linked to wide-spread shopping deals since the 1980s,3 and has grown exponentially since then. With the advent of Cyber Monday, the Black Friday equivalent for online shopping, consumer patterns have continued to move toward e-commerce. Given the emphasis on online shopping, Cyber Monday has quickly become a global phenomenon. Now, many countries around the world embrace Black Friday as the beginning of the holiday period, making it one of the biggest shopping weekends of the year.

In both 2017 and 2018, in-app ad spending on the Smaato platform started to increase in the lead-up to Thanksgiving and peaked on Cyber Monday. In 2018, ad spending increased by 20% on Cyber Monday compared to the data collected in 2017. Furthermore, smartphone users are dedicating more time to their device, with the average US user spending almost three hours on their phone, most of it spent in-app.4 This highlights the continued importance of in-app advertising for marketers looking to reach their target audience as part of their holiday campaigns.

The highest peak in ad spending during the holiday period occurred on December 22, 2018, which is also commonly referred to as “Super Saturday”. This is the last Saturday before Christmas, and is one of the final days for shoppers to complete their holiday purchases. Typically, this day is for in-store shoppers, but the increase in ad spending on the Smaato platform may be due to retailers promoting last-minute deals to encourage consumers to visit their physical stores.

While Black Friday and Cyber Monday have long been part of US shoppers’ holiday traditions, the two days have only recently become part of European shoppers’ vocabulary. Online retail giant Amazon first ran Black Friday sales in Europe in 2010, and since then, many European countries such as France, the United Kingdom, Spain, and Germany have all embraced the weekend as the beginning of the holiday period.

In France, mobile phones made up 69% of website traffic for fashion retailers, compared to only 27% for desktop on Black Friday in 2018.5 Similarly, on the Smaato platform the data collected from France shows a peak in ad spending on Black Friday, as consumers were browsing their retail apps for deals. Furthermore, industry trends show that 37% of French e-commerce orders were placed using a smartphone, up 10% from 2017.6 Not only does this highlight the continued adoption of this pre-holiday shopping weekend, especially in Europe, but it also shows the increased importance of mobile phones in the retail process. 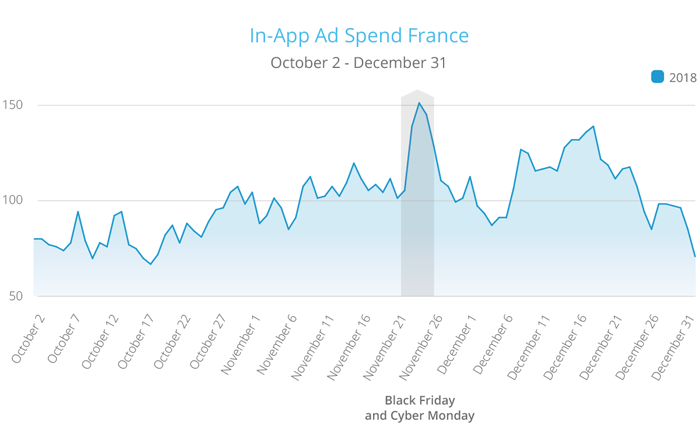 Many advertisers assume that the period between Thanksgiving and Christmas is prime-time for advertising. And while this is true for holiday sales, the time after Christmas may offer an opportunity to reach consumers while they have time off for a lower price than during the higher cost holiday period. 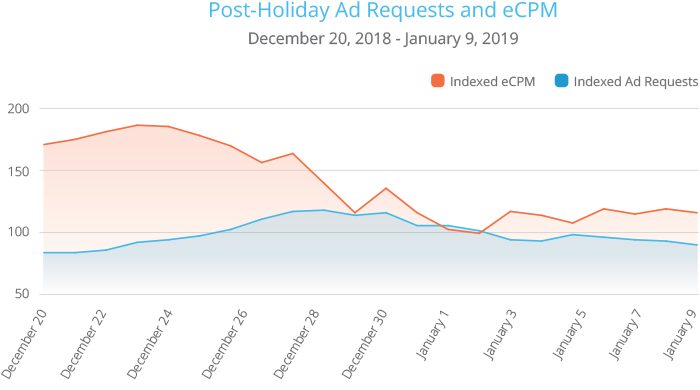 On the Smaato platform, the period between Christmas and New Year’s saw an uptick in ad requests, presumably as people were off work with additional time to spend in-app. In contrast, eCPMs dropped drastically in the days following Christmas. This presents an opportunity for advertisers to capitalize on a high demand for in-app ad requests, but with a much lower investment per impression than the pre-Christmas peak.

What to Expect This Season

With online and mobile shopping continuing to grow, the traditional perception of a holiday shopping weekend may be gone for good, as consumers are no longer relying on in-store sales but can shop across platforms. We can expect the 2019 holiday season to be the biggest one yet, with record-breaking sales both in-stores, online, and through apps.

This year, the period between Thanksgiving and Christmas is shortened to only 26 days compared to last year’s 32, meaning that many retailers are starting their sales earlier than usual. As such, we can expect to see retailers run deals through the Thanksgiving weekend, and even during the week leading up to Thanksgiving.

As more countries around the world, especially in Europe, are adopting Black Friday as the official start of the holiday season, we can expect more global retailers to offer enticing deals to encourage consumers to shop. While advertisers are increasing their budgets to account for more frequent exposures and the higher costs of ads, ad requests will also increase significantly as more consumers are using apps to search for the best deals. A continuously growing number of consumers will also be doing their holiday shopping through smartphone apps, as opposed to through desktop or mobile browsers, making in-app advertising an even better strategy for marketers looking to reach their target audience.