Smaato has regularly produced this report since 2015, and during this time, we consistently charted mobile’s growth as an advertising medium. The H2 2018 Global Trends in Mobile Advertising report marks a tipping point in which mobile is beginning to overtake all other media to become the most popular media format among advertisers. As advertisers direct more money into mobile and in-app advertising, and consumers continue to adopt smartphones around the world, both demand and supply increased year-over-year.

Apps were clearly the main driver of mobile’s growth in H2 2018. Our report found significant growth across all key in-app advertising metrics, including ad request volume and eCPMs.

As app usage climbs worldwide, monetization opportunities for mobile publishers are also on the rise. Today’s engaged mobile users are driving up mobile ad request and impression volumes — and with 60% more apps expected to monetize through in-app advertising in 2019, this trend is not likely to slow down anytime soon.1 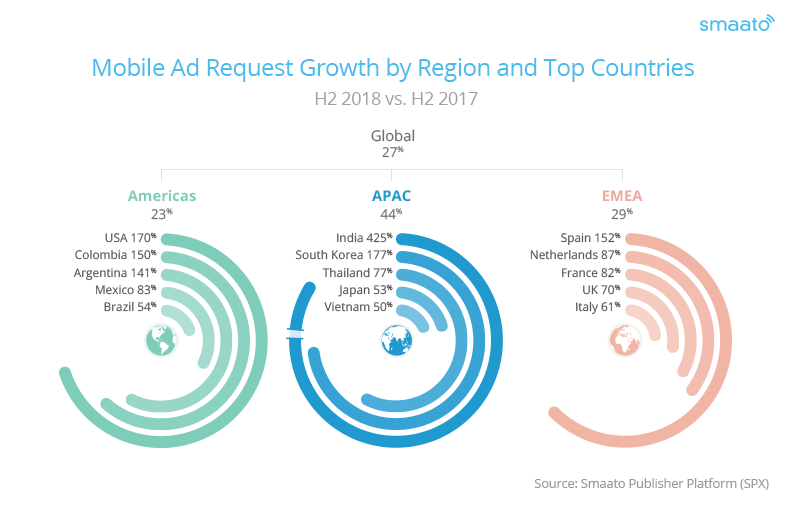 The number of mobile ad requests on the Smaato platform increased 27% from H2 2017 to H2 2018. India impressed with the highest growth rate worldwide. The country’s exploding ad request growth is characteristic of emerging mobile markets in which the number of mobile device owners, their time spent on mobile, and overall app download numbers all rise quickly. 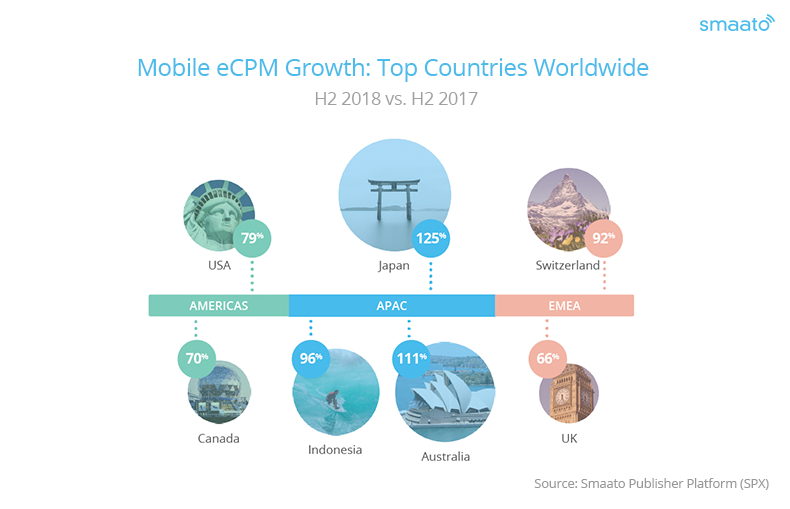 While India finds itself in the “experimentation” phase of app maturity, the US is in a stage of “ubiquity.”3 The average US consumer has over 100 apps installed on their smartphone, and over the past year, in-app mobile ad spending in the US has increased by 38%.4

Our H2 2018 Global Trends in Mobile Advertising report includes a number of insights into what’s driving the remarkable growth of in-app advertising. These key insights include: