Mobile advertising passed desktop advertising in 2017 and will never look back. The gap in revenues generated by the two continues to grow, and by 2022 mobile will make up a staggering 75% of all digital ad spending.1 With this enormous shift in mind, it’s more important than ever that marketers gain a deep understanding of the different mobile ad formats out there. Here’s a look at some of the top-trending mobile ad formats to help you improve campaign performance.

On the Smaato platform, all video formats are on the higher eCPM end compared to others, such as native and standard banner ads. 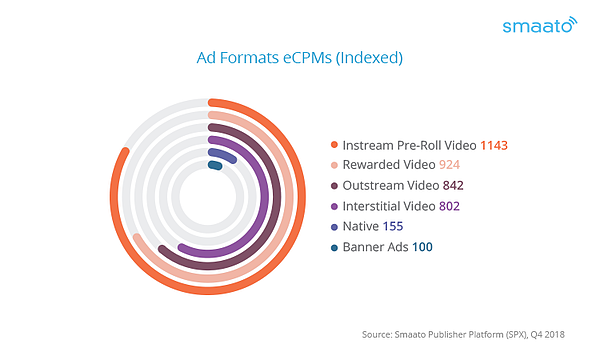 At the same time, video guarantees the highest click-through rate (CTR). This high CTR, which is way above both standard banners and rich media formats, suggests that video is by far the most engaging mobile ad format. Within the video category, interstitial and rewarded video formats are industry favorites due to being non-intrusive and generating high conversion rates. 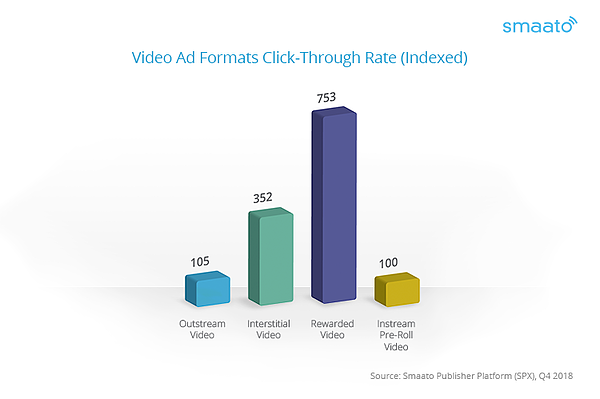 Rewarded is the sweetheart of the video ad family, offering an incentive to the user who is watching the ad. These opt-in ads are unique in offering something in return for the viewer’s attention, and in most of the cases the reward includes in-game bonuses, an extra life, hints, or some other kind of valuable gifts.

Rewarded video is especially big in the gaming industry. Since it is not skippable, unlike other video formats, it guarantees the highest CTR. Additionally, thanks to the end-card feature that includes a click-to-action button, it is the best choice for generating new leads, downloads, and other types of conversions.

The main reason brands continue to shift their advertising budgets to mobile games is because they want a brand-safe environment. This is why the gaming industry is growing in popularity with advertisers. The well-established gaming brands accompanied by high-scale quality production creates a brand-safe ambiance. Media, retail, and automotive brands are among the most progressive ones to step out of the traditional thinking-box and start advertising in gaming apps. 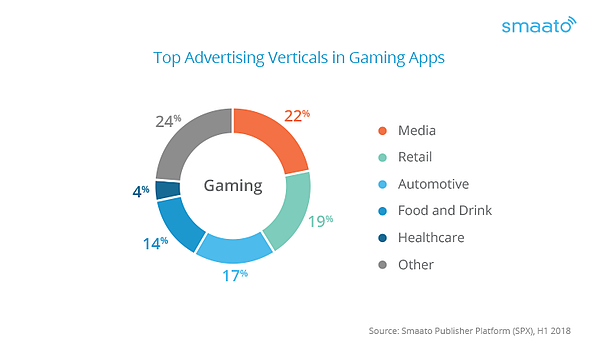 According to our Global Trends in Mobile Advertising H1 2018 Report, media accounts for the largest share of mobile ad spending in gaming apps (22%), followed by retail advertisers (19%) and automotive brands (17%).

Regardless of whether you’re advertising within games or other types of apps, the key to successful video campaigns lies in quality production and smart positioning of the ads. If done right, video ads have the potential to be the most engaging ad type compared to all other mobile ad formats. The downsides could include the required amount of production resources and potential intrusiveness in the user experience domain, especially having in mind that average video length is between 15 and 30 seconds.

Interstitial ad formats are the go-to choice for campaigns that aim to build brand awareness. They offer a wide range of plugins, like photo galleries, videos, CTA buttons, store locations, and others, while serving best on mobile and tablet devices. They can provide a smooth transition between two segments of a mobile game or between the pages of a news app, making them non-intrusive and able to deliver a high CTR.

When it comes to interstitial video ads, those that are skippable after 15 seconds are two times more likely to be completed, compared to those skippable after only 5 seconds. Data shows that enabling skippability after 15 to 20 seconds, generates better completion rate (between 41% and 58%) without disturbing the user experience.3

The most common interstitial sizes are:

A larger canvas space and the fact that it offers a combination of multiple media elements in one ad gives advertisers a wide range of possibilities to be creative and provide some slick and brainy commercial content. However, if not executed properly, poor to mediocre solutions delivered on these large formats could ineptly backfire to advertisers in terms of engagement rates, as well as the brand image sentiment and the overall user experience.

Advertisers are moving away from the traditional ad formats and leaning towards the more modern ones. These newer formats usually offer better user experience and guarantee higher ad viewability and conversion rates. However, while banner ads do have their limitations, their era is far from over.

The most common standard banner ad sizes are: 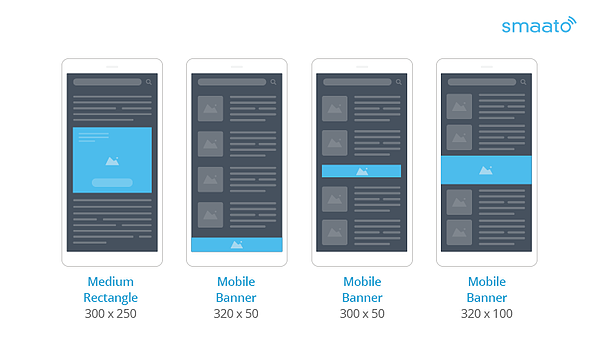 At the same time, they are prone to an ad-blindness syndrome, and precisely because of that, brands who want to build brand visibility and establish brand awareness should opt for additional ad formats to supplement their campaigns. The ones who can afford to incorporate this ad format in their campaign mix are the well-established and recognized brands, as it is more likely that their message will catch the eye of the average visitor.

A big factor in favor of display ads is their price, as banner ads are the cheapest mobile ad format with the lowest eCPM industry-wide.

Native ads are noticeable for following the natural form and function of the environment in which they are placed. Native ad formats are complementary to the core six IAB native ad formats: in-feed units, paid search units, recommendation widgets, promoted listings, in-ad (IAB standard) with native element units, and custom. It’s been reported that native ad spend increased 600% from 2014 to 2016.4

In terms of budgets, it is expected that native video will double and take marketing share from pre-roll in 20195, while the optimum length of the native video was found to be 15-22 seconds on mobile and tablet devices.

With new advertising trends emerging every year when it comes to ad formats, advertisers will need to be more cautious to avoid jumping on the bandwagon and tailoring campaigns solely based on what’s trending at the moment. The safest way to choose the best formats for any campaign is to think about the market you aim to reach, as well as the level of interaction you want to boost between the audience and ads being served to them. But the ultimate goal should, of course, be focused on building or strengthening your brand awareness and generating a conversion.