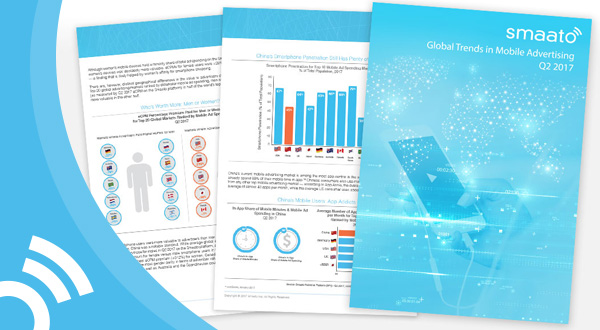 With even Bill Gates using an Android phone, it’s no surprise that this mobile OS is the most popular in the world. Android also rules ad spending on the Smaato platform, as revealed by analysis of Smaato’s 1.5+ trillion ad impressions in the Q2 2017 Global Trends in Mobile Advertising report. This report uncovered several striking differences in the use of mobile advertising on iOS and Android devices — differences that stem from early decisions that Apple and Google made about their respective mobile operating systems.

From the start, Google built Android to maximize reach. The OS was free, and any OEM could customize and release Android-based devices. Why? Because more people with mobile internet access meant more mobile searches from which Google, as the default search service, benefitted by gathering more data and selling more ads against those searches. Reach and advertising were Google’s primary objectives from the start.

In contrast to Android, which sought to monetize primarily through ads, the iOS and iPhone/iPad ecosystem profited from selling its users (premium-priced) devices, accessories and apps. In the iOS App Store, users couldn’t even download a free app without verifying a credit card, which meant that the Apple ecosystem was set up for higher-income individual purchasing from its inception. Apple’s strategy was about exclusivity and conversion.

Current consumer purchase and usage behavior on each OS shows that even now, Android has much more reach, commanding over 70% of the overall worldwide mobile OS market share¹ — and that reach advantage is only getting bigger. Of the 432 million smartphones sold in Q4 2016, for example, 352 million ran Android (82%) and 77 million ran iOS (18%).² 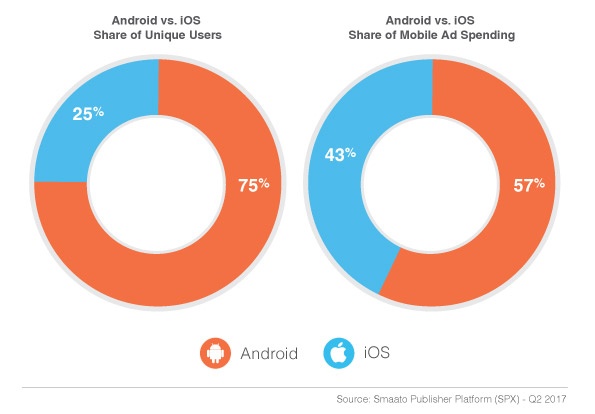 iOS users, although smaller in number, have +13% more app sessions per daily active user among apps worldwide,³ spend nearly 2.5X more on in-app purchases⁴ and simply buy more stuff (+20% higher average ecommerce order value)⁵ than Android users. iOS users also engage with mobile ads more frequently than Android users — a Q2 2017 study of US mobile users found that of those that clicked on a mobile paid search ad, 65% were iOS users and only 34% were using Android.⁶ 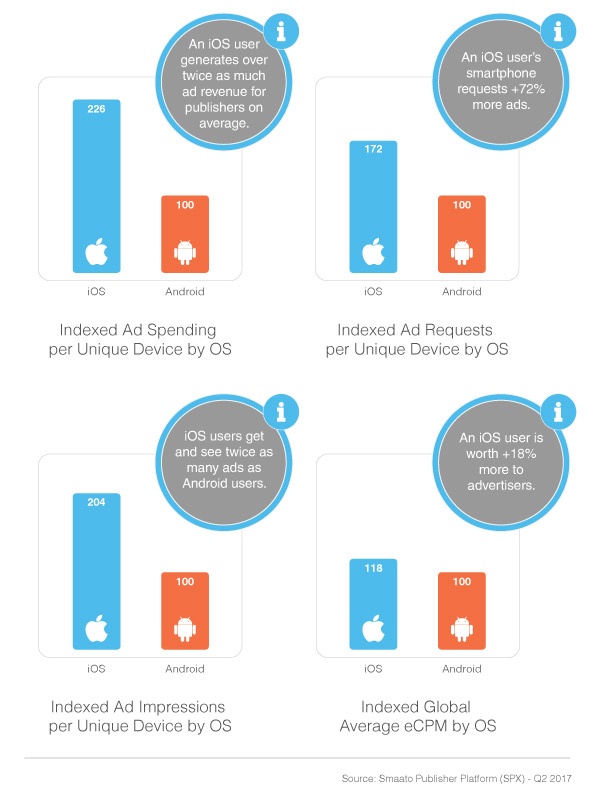 iOS users’ higher daily app sessions create more opportunities per user to receive mobile ads, and their increased propensity to buy makes them particularly attractive to performance advertisers looking to engage in ecommerce or drive app downloads. It is therefore not surprising that iOS users yielded almost twice as much revenue for publishers on the Smaato platform on a per-user basis as Android users in Q2 2017.

In a quarter that marked the 10th anniversary of the iPhone, we also found that iOS users also commanded +18% higher eCPMs, and their iPhone usage behavior generated twice as many ad requests from their device (i.e. on a per-device basis) as from that of Android users.

What does this mean for advertisers and publishers? If online and mobile sales are a marginal part of an advertiser’s business, Android is a good fit for an advertising strategy in which reach and the need to be top of mind when a consumer walks into their local store are paramount. If, on the other hand, driving ecommerce or iPhone app downloads are key objectives of the advertisers’ strategy, iOS users may be particularly attractive.

For further insights into the mobile programmatic advertising landscape, check out our latest Global Trends in Mobile Advertising report. In this report, you will discover: